Meet the new groundbreaking GoodBarber version, 4.0 “Next Generation Apps”. One subscription, one back office, to be present on all screens. No more websites, just an app!

April 04, 2017 – GoodBarber released the latest update of its platform introducing the concept of Next Generation Apps, a combination of Progressive Web Apps and Native Apps. With a fusion of the most successful characteristics of the web, and the great functionalities native inspires, GoodBarber is revolutionizing the concept of the website.

This new protocol introduced by Google in 2015 has slowly made a name for itself in the tech trend setter world as the new way to build a perfect mobile presence, but the fact is that native apps have become the dominant force in the mobile platforms for very specific reasons. When it comes to fully harnessing mobile devices’ hardware capabilities, native, platform-specific applications are still the best option on the market.

GoodBarber still strongly believes in the power of native apps, which accounted for about 87% of all mobile internet traffic in 2016. It’s therefore been decided to embrace this new technology in an innovative way, by breaking down the dividing barrier between websites and mobile apps, and unifying all digital presence in a single ecosystem. 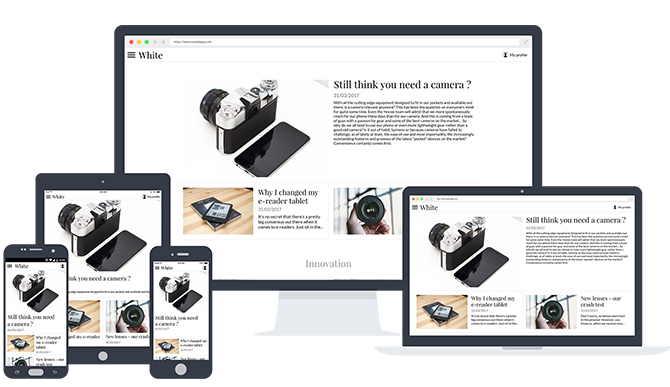 “With this new version of GoodBarber we want to toss away the old concept of websites, making the user start directly from the app—the only reference needed for one’s online presence” – Sébastien Simoni, GoodBarber CEO. GoodBarber 4.0 does indeed allow for the creation of an app that can be used simultaneously on desktop and mobile. A change of edge that will enable the user to work from a single platform, increasing the productivity and success of his project.

GoodBarber PWAs are intended to work side by side with native apps, to fulfill all the elements of perfect UX: discoverability, adaptability, speediness and offline working mode. The concurrent use of a progressive web app and a native app will provide a new, upgraded experience that enables the end user to use any device (desktop, tablet, mobile) without ever ending interaction with the same UI, designed with the natural user navigation in mind; touch friendly, simple and universal.

GoodBarber is the leading European app builder, created in in Ajaccio, Corsica 2011. Today there are more than 30,000 apps running on its technology. Our mission is to provide a tool to create strong, high-performance apps with the best design and user experience. In order to achieve these goals, we are constantly improving our way of creating Beautiful Apps. This principle is exemplified by our avant-garde decision to align native development with the new generation of apps, Progressive Web Apps.